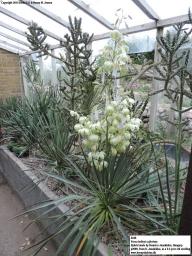 This hybrid of Yucca baileyi x gloriosa were created sometime before 2009 by Demeter Janakidisz, from the Botanical Garden in Budapest, Hungary.

Several clones of this hybrid are circulating. One specimen is growing in the garden of Horst Faber in Germany, his specimen bloomed in 2013. I also believe, that the combination Yucca baileyi x gloriosa were made more than once or there were several seed pods which resulted in different looking plants.

I have some different specimens of this hybrid combination Yucca baileyi x gloriosa:

BMJ#2249A Yucca "Janakidisz hybrid" baileyi x sp. [gloriosa ?]. Received in 2009 as a plant, it might have been as a cutting I have not made any notes about this!! I have 2 plants (growing in pots in greenhouse 4) They have leaves which is wider than those of BMJ#2249B but not as wide as those of 2243B.

BMJ#2249B Yucca "Janakidisz hybrid" baileyi x sp. [gloriosa ?]. Received in 2009 as a plant, it might have been as a cutting I have not made any notes about this! Growing in the ground in greenhouse 1. Many leaves looks like the plant Thomas B. CH show us above.

BMJ#2254 Yucca "Janakidisz hybrid" baileyi x gloriosa, Received in 2009 as a 2-3 year old seedling. Leaves narrow (growing in a pot in greenhouse 4), might get wider leaves if grown in the ground.

Short description of BMJ#2248 Yucca "Janakidisz hybrid" baileyi x gloriosa:
Plant: Acaulescent, after the first flower in 2014, the rosette died, and at the time of writing (August 2015), there are no sign of any new rosette forming from the base of the stem, yet, but the stem feels firm and fine, so eventually something will happen from either the base or the rhizomes below..
Leaves: Very rigid, erect and spreading, 48 - 65 cm long., up to 24 mm wide, glaucous, the margin is tan in color and fading to white in age, with very few strait rather thick fibers at the edge of the leaves, fibers are up to 4-5 cm in length. There are a very sharp reddish brown spine at tip of the leaf.
Inflorescence: glabrous, 100 cm high and the stem i 13 mm thick at the base,
Scape: 75 cm tall starting from between the leaves, paniculate, with a short branches up to 18 cm long, held in an upright position.
Flowers: pendulous (bell shaped), greenish white, 6 to 7 cm long. Outer tepals greenish white in color 25 mm wide and 70 mm long. Inner tepals paler greenish white, 32 mm wide and 70 mm long. Ovarium lime green .. mm long and .. mm in circumfence. Stigma lobe  lime green, .. mm long (I am sorry, I have lost the notes with the size of the inside of the flower). Stamens are strangely angled, and decorated with many fine hairs - see photo further below in the photo gallery. Taste of the flowers somewhat bitter. Scent strong and pleasant.
Fruit: 70-90 mm long, 27-37 mm thick, tip of the fruit held in either a slightly upward angle, a right angle or even a a 45 degree down facing angle. And as the fruit/pod grow bigger, it's weight will force the tip to an even sharper down facing angle. At first the seed pod is fleshy like those of the indehiscent-fruited Yucca gloriosa, and eventually it dry up, but it does not or hardly not open as the dehiscent-fruited Yucca baileyi species do.

NOTES:
The Yucca breeder Horst Faber in Germany had a specimen which bloomed in 2012 and of which he were able to make seedpods on and to make these two hybrid combinations:

It will be interesting to follow the outcome of those hybrids.

List of man made Yuccas made in the late 20th. Century and in the early  21st. Century: