According to Larry Shambaugh (Lawrence, Kansas) who was the guy, who did collected the seeds, are the plants Yucca filamentosa!

Yucca filamentosa, Yucca flaccida and Yucca filamentosa ssp. smalliana isn't native to Kansas, but they are naturalized in the state of Kansas, as are they in many other locations. It could also be a hybrid of Yucca arkansana or Yucca glauca, which both are naturally growing i Kansas!

The leaves of the plants from this batch of seeds are quite slim and has a smooth surface, so maybe this plant aren't a Yucca filamentosa but some thing different? They could be Yucca filamentosa ssp. smalliana, or hybrids of some kind, which I think is most plausible. The seedlings were quite variable. 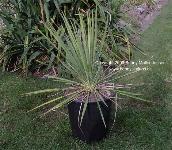 The original rosette died during the winter 1998-99, but new rosettes grow from the rhizome, the new rosettes grow very fast. The flowers are greenish-white, small in size and aperently infertile, and there are only little pollen, which didn't work either.

#784C
This one is the biggest and most beautful of the plants, it has a tall inflorescens with cream colored flowers. The flowers are much larger than 784B, I were not able to pollinated it, but the pollen which there are lot of is fertile.