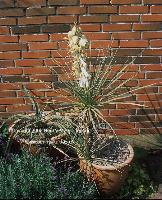 This is one of the first successful pollinations, that were made in my garden in the summer of 2003. The seed parent were a garden form of Yucca filamentosa,and the pollen parent a Yucca glauca, which I did get from the former nurseryman P. C. O. Nørgaard, from the Isle of Mors, in Denmark, it had flowered many times in P.C.O.'s unheated greenhouse.

Of this cross did I get 2 seed pods, which were given an individual number:

I have not been able to see any significant difference on any of the above, and they are very similar in growth.

The seeds from this cross were sown in 2004, and the first flowers are expected in 2009, both in our garden and in the garden of Steen Stjerne.