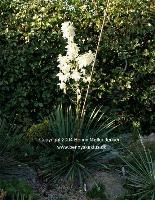 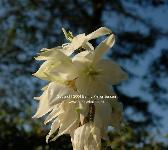 Where did I get the plant from:
I have received the plant in 2001 from Patrik Flank in Sweden, whom bought it from a Swedish nursery.

Short description:
Plant acaulescent with one or several rosettes, forming new rosettes from short rhizomes or inside the old rosette which have flowered. Leaves: dark green, up to 53 cm long, 20 to 24 mm wide around the middle, many curled fibers at the margin of the leaves. Inflorescence: glabrous, paniculate, 145 cm high, with a few short branches up to 10 to 13 cm long, the lowermost branches are held in an upright angle, while those further up are almost held in a right angle, bending slightly upwards. Scape:  up to 85 cm cm held high above the leaves.
Flowers: star formed. Fruit apple-green, has a smooth surface, ? mm thick and ? mm long, and has a rounded (convex) back. Seeds: not known at the time of writing.

Where do I grow the plant:
In a raised well drained bed.

Hardiness:
So far it has been very hardy, it does not show any damage after the winters.

In August 2004 I did cross pollinate the plant with pollen from one of my other Yuccas:

I also use the pollen to pollinated it with:

It will be very interesting to see the outcome of the new hybrids, but I do not expect flowers in the new hybrid until 2010 at the earliest! 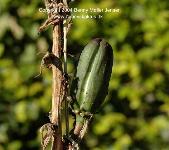 The fruit of # 1581 Yucca 'Elegantissima'
Back to Yucca hybrids:
Back to list with Yucca species: