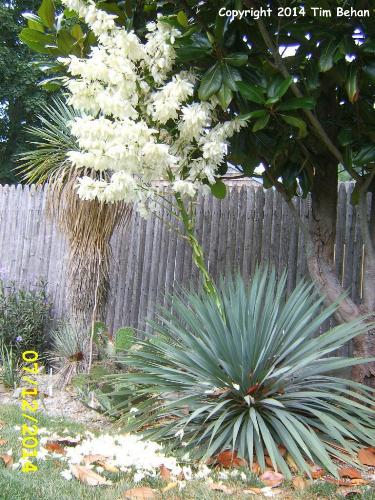 The first specimen in bloom in the yuccagarden of Tim Behan.
Photo from July 12th. 2014

The seed plant #1578 Yucca filamentosa is growing in our garden and the pollen parent is a Yucca rostrata growing in the garden of Ruud Wouterson, The Netherlands. I did receive pollen by post.

The seeds from this cross were sown in 2008. All my own specimens did unfortunately die as seedling during their first winter, they were most likely freeze dried, and not killed by the temperature!

The first two specimens bloomed in 2014 in the garden of Tim Behan, MA, USA (he has 4 different clones/specimens which were sown in 2009, photos further below). And there are at least 1 more clone in a garden in Germany.

Short description one of the plants of this cross the:
please look at the photos further below.

Propagation:
This hybrid is not yet propagated, and is only cultivated by a very few people in the USA and Germany.

Hybrids made with this hybrid as one of the parent plants:

This hybrid is also self fertile:

List of man made Yuccas in the late 20th. Century and in the early  21st. Century.