Opuntia hybrids,
natures own and man made!

The most interesting is the natural hybrids (well that's what My opinion!!). Some of them are described in the literature as species, but are actually hybrids. Others are "described" as hybrids but are a different looking species.

Below are a few of the various hybrids that I grow in my garden.

This Opuntia is one of my favorites, it's a very prolific bloomer, and VERY hardy. it was found by Claude Barr near the city of Smithwick South Dakota. it is a hybrid between Opuntia polyacantha and Opuntia fragilis. In some literature it's by mistake stated that it's  a hybrid between Opuntia fragilis and Opuntia humifusa. There are more hybrids that looks quite a lot like this one but which do not have such large flowers. I use Opuntia 'Smithwick' to make new hybrids while this hybrid is probably the most hardy cactus for cultivation in Denmark. So far I have not made many improvements but I do have a few very promising hybrids that I currently is testing for hardiness and then will start propagating for introduction into cultivation in different gardens around the world.

This form of Opuntia fragilis grow on  Dixie A. Dringman's property South of Wenatchee at 300 m elevation, Chelan County Washington state Dixie A. Dringman #OH-001. The pads can look quite different in this location see picture (fig. 3). Other very alike hybrids grows all the way up to Southern British Columbia in Canada, but those I haven't seen my self yet. I'm not sure that they are a hybrid or just a local form of Opuntia fragilis.

The two plants on the left is the hybrids and the plant on the right is a "normal" Opuntia fragilis var. fragilis. Dixie has told me that the plants rarely sets seed, but the variation mentioned above, could be that the plants has spread with seeds and not only vegetatively.

Distribution:
Opuntia xcolumbiana which is better known as Opuntia erinacea var. columbiana (Griffiths) L. Benson is distributed in Northern Oregon, Eastern Washington. There has also been unconfirmed records of this species from Northern Idaho and in Southern British Columbia in Canada. And but in the book "A Review of the distribution of the Native Cacti of Canada" by Ken Hancock it's not confirmed in Canada either. Among other plants in Washington, it grows with Lewisia rediviva, Eriogonum thymoides and Erigeron linearis.

"The name game":
This species has a problem name, but Bruce Parfitt has recently (1998) confirmed it to be a natural hybrid of Opuntia polyacantha and Opuntia fragilis and the species valid names is now Opuntia xcolumbiana.

Notes:
Some of the Opuntia hybrids has been known to be sterile, reproducing entirely by detached joints, but Opuntia xcolumbiana can be grown from seeds, but they are not easy to germinate. I have several plants that all where from seeds collected in habitat.

Bill Beaston has been so kind to write a separate page about his observations of Opuntia xcolumbiana in habitat: Opuntia x columbiana by Bill Beaston.

I haven't had much luck with Opuntia xcolumbiana, in the garden, it has just barely survived, but it looks like it thrive in a soil of pure coarse sand.

Benson, L.  (1982) THE CACTI OF THE UNITED STATES AND CANADA.
Stanford University Press.

I have this plant from Georg Sydow, who in the 1980's was well known among hardy cactus people. He got the plant from a cactus friend in Budapest, Hungary.
It's VERY hardy and has survived many hard and long Danish winters.

This Opuntia is a hybrid between Opuntia fragilis and Opuntia polyacantha var. rhodantha, The plant has small oval pads covered with white spines. Its a prolific bloomer with many small rose flowers. This hybrid could very well be the same as Opuntia ' Georg Sydow '. 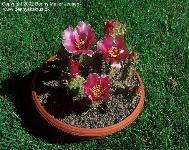 This is the first Opuntia hybrid that I have made, it a cross of Opuntia ' Smithwick ' X Opuntia ' Budapest '

This Opuntia is a hybrid between Opuntia fragilis and Opuntia polyacantha var. rhodantha, The plant has small oval pads covered with white spines. Its a prolific bloomer with many small rose flowers. This hybrid could very well be the same as Opuntia ' Claude Arno '.

This Opuntia is a hybrid of unknown origin. I have it from Georg Sydow who got it from Stüzer in 1973. It has small club shaped pads 7 x 2,5 cm, with thick white spines. In Denmark it's a shy bloomer, but at one of my friends in Lakewood Colorado, it blooms well with pink-rose flowers.

This hybrid was also made by Georg Sydow, but I don't know both parents, The female parent is Opuntia polyacantha var. rhodantha. It has fat 10 X 5 cm pads with one or two thick white spines and rose flowers. 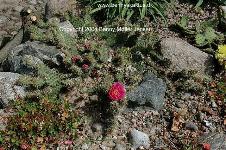 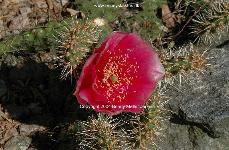 This is so far the best hybrid that I have made, it's a cross of Opuntia 'Smithwick' X Opuntia polyacantha 'Carmin' it was made in the summer of 1993. and the seeds were sown in 1994. The plant bloomed for the first time in 2003. It has so far proven to be very hardy, and is at the moment it's being tested near Stockholm in Sweden. When the flowers are opening they look like rosebud - hence the cultivar name.


Thanks to the following who has contributed with either valuable information and/or pictures for this page: