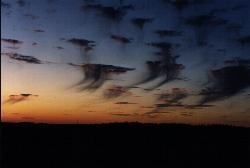 Where do Benny live?

My property is situated at around 57.40N 10.00E latitude. it's only 15 km from the shore of the North sea, a few kilometers from south of the City of Hjørring (Hjørring's web site).  The property, where I am gardening, is 2600 square meter.

Climate in our garden:

Precipitation in my garden:

Temperatures in my garden, the temperatures (Celsius) are measured in the shade 1,5 meter above ground level:
Additional notes to the weather in 2000:
This year was again a very wet year (a new record for February). It was a cold year too, there was only 11 days with temperature above 25C! one of those days was a new record of 27,4C in April. October was frost free for the second time in more than 110 years, and it was the warmest November since 1953.

The the figures in the tables below is from various books about the Danish weather, they are measured from 1890 to 2000