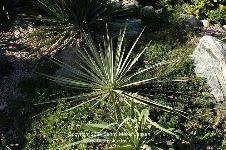 Where did I get the plant from:
I got it  from my friend Ulrich Kalthoff in Germany, with the name Yucca 'Karlsruhensis'.

Short description:
Plant acaulescent with a single rosette. Leaves: blueish-green, very much like those of Yucca angustissima ssp. kanabensis, up to 40 cm long, 10 mm wide around the middle, some fibers at the margin of the leaves. Inflorescence: not known. Scape:  not Known. Flowers: not known. Fruit not known. Seeds: not known.

Where do I grow the plant:
In a raised well drained bed.

Hardiness:
So far it has been very hardy, it does not show any damage after the winters.

Notes:
This one is most likely a F:2 hybrid, as the plant that I got looked like a seedling and not a cutting.

Other Notes:
In late 2006 small plants will be available for you, as it is propagated invitro by Succulent Tissue Culture in The Netherlands. 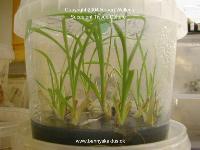 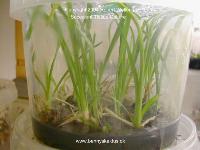 Yucca 'Karlson' now out of the in-vitro
Photo from July 2006. 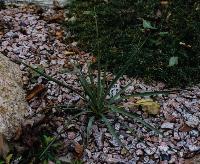